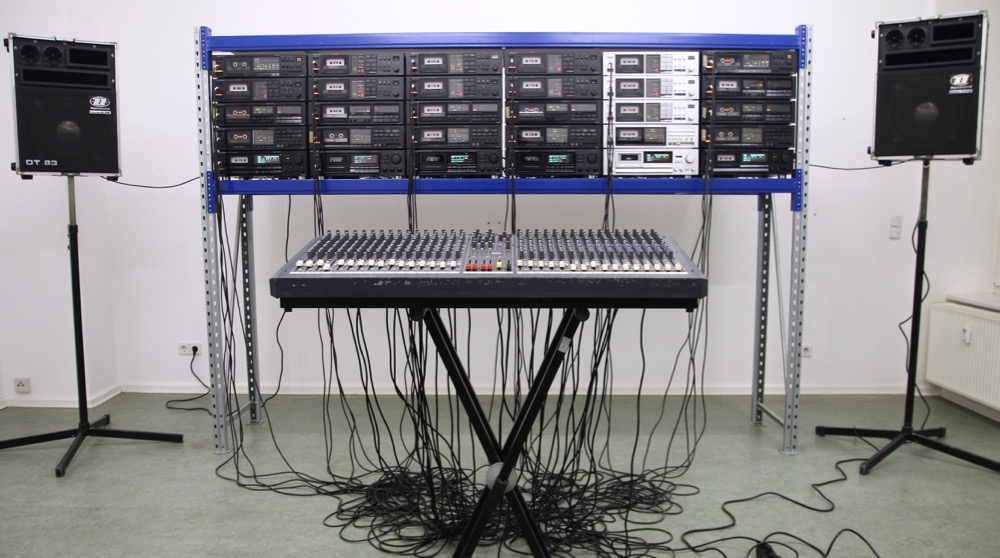 In an installation of 30 cassette decks of the Onkyo brand from the Integra series, live music recordings are played simultaneously and mixed into one another via a mixing console. The recordings of different musical performances, which were performed in the style of spontaneous street music and karaoke up to smaller concerts, were made in 2016 in the Mauerpark in Berlin. Due to the spatial proximity of the musicians to each other, the various musical performances also overlapped acoustically. The performance installation "Mauerpark" by Matthias Mayer captures this special situation and intensifies it by further condensing the carpet of sound found in Mauerpark on such days through the mix of recordings.

The dynamics of the spontaneous and unannounced Mauerpark performances, which took place wildly scattered over a relatively small and manageable area of the park on the edge of the weekly flea market, reflected the virulent cultural melting pot of Berlin as a European and globally respected metropolis of experimental character that was on the move. At that time the Mauerpark had developed into a creative hotspot of (free) live music due to the continuity of the weekly activities. In the years that followed, the emerging "cult status" of Mauerpark with regard to live music cracked. Live musicians have often been ordered by the police to stop their performances. With regard to residents (e.g. in newly constructed residential buildings near the park) and park visitors, there are currently regulations that limit the area for live music to a very small section of the park. Also, the musicians are only allowed to sound the environment in one direction and are not allowed to use power generators, which inevitably leads to fewer performances. The wild and swirling sound of 2016 is passé.
With regard to this development, the work of Matthias Mayer acquires an additional historical significance, which is also expressed in the use of analog technology from the 1980s. It is also to be understood as a critical voice on the subject of gentrification, which is spreading parallel throughout the city. The development in the Mauerpark provides a further example of Berlin's already achieved and still threatened loss of image as the cosmopolitan capital of artists and creative people and should symbolize their withdrawal or departure.